You are here: Home / About John Chatterton 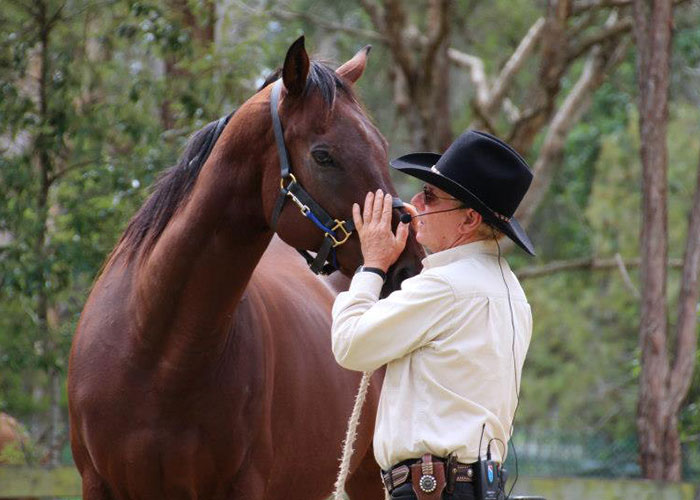 Australia’s renowned horseman and author John Chatterton has spent most of his life working with young and problem horses, first in South America and for the last four decades in Australia.

He enjoys passing on his knowledge to his clients, creating better relationships for horses and their owners with the emphasis being on safety for both.

John provides two and three day clinics around Australia, as well as private and group lessons. His home base is in Chambers Flat, Brisbane and he spends a lot of time giving private lessons around all parts of Brisbane and the Gold Coast and Sunshine Coast, and other areas of South East Queensland.

John believes that horses have an in-built need for a comfort zone. He bases his training on affiliative leadership rather than dominant leadership, so that the handler or rider becomes the comfort zone for the horse.

John is the author of  John Chatterton’s Ten Commandments, a training manual which introduces the reader to his unique ten step training system.

He is also very well known for designing and patenting the revolutionary JR Easy Traveller Horse Float with it’s distinctive and thoroughly researched, tested and proven features which stand it apart from other horse floats.

John Chatterton is a horseman in the true sense of the word. His unique perspective demonstrates a rare depth of understanding of horses. John grew up on a cattle ranch in Paraguay, South America where the horse was often a person’s most valuable possession. The care and respect of the Gauchos (local native horsemen) for their horses was reflected in their horsemanship. Studying their technique and many others over the past 50 years, John has developed his own unique method of communicating with horses using specific signals and training, which he calls his Ten Steps Program.

Followed correctly, these Ten Steps will give you a greater understanding and communication with your horse. It will increase their willingness to learn, making them calmer, more responsive and attentive to you, and will improve most under saddle problems as a result. After many years working with people who are experiencing problems, John has found that most horses have these problems due to not having had their basics well established. The degree of respect and confidence necessary for a horse to be comfortable, is often not there.

Using John’s Ten Step Program, you can easily and inexpensively convert a horse which is dangerous to work with, into one which is safe and a pleasure to be around in only a short period of time. Habits such as being hard to catch, difficult to float or load, not tying up, walking over you or not paying attention to you, are easily remedied. All of these and many other common annoying problems are easily overcome using the Ten Steps Program.

John and his wife Janet, have bred many foals over his four decades in Australia, giving him the opportunity to closely study their behaviour and habits. From this he has gained an insight into why many equine problems occur no matter what discipline the young horse goes on to be trained in. John observed that young foals are hyper sensitive and responsive. He believes that man-handling and over powering them for even the simplest things, such as putting a halter on, can negatively affect their learning potential. John’s foal weaning and handling techniques have given him a name as a horse psychologist renowned for training young and problem horses.